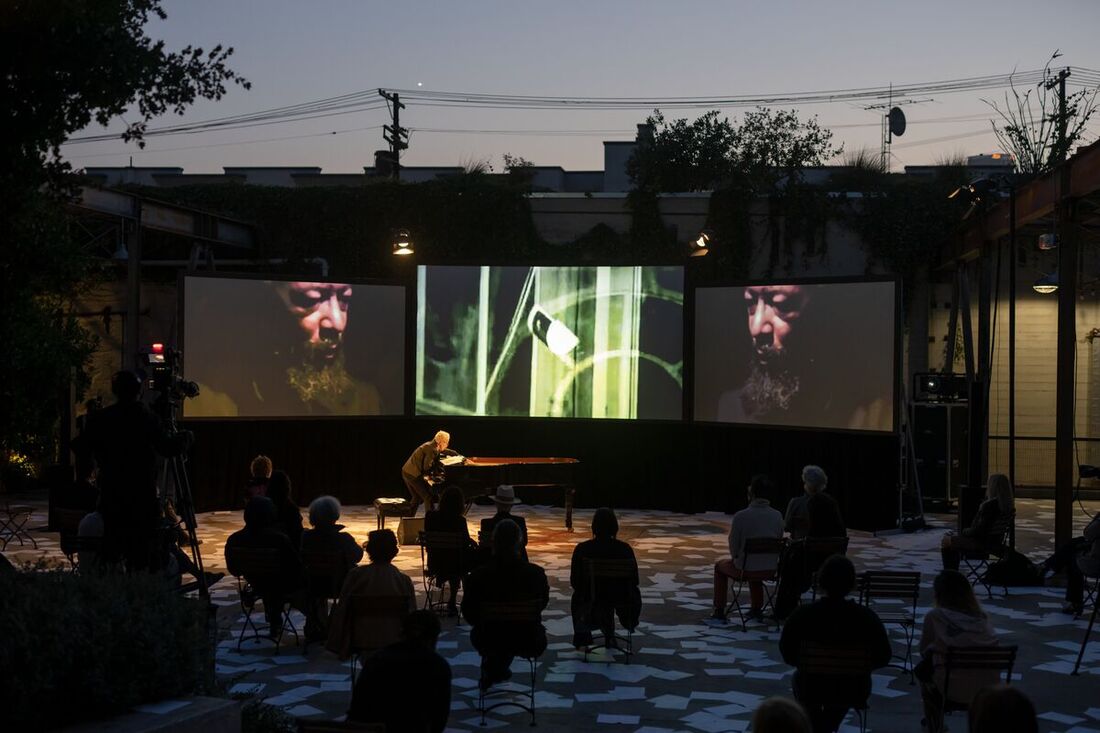 Performance at Hauser & Wirth Los Angeles in collaboration with Monday Evening Concerts. Photo: Elon Schoenholz Photography © 2021
WATCH 'GLOBAL FAX FESTIVAL'
For the first time ever, David Hammons, in collaboration with Monday Evening Concerts, has restaged his 2000 ‘Global Fax Festival’ at Hauser & Wirth’s Downtown Los Angeles multi-use space, to honor the renowned composer and conductor Lawrence D. ‘Butch’ Morris. Worldwide streaming begins Tuesday, May 25, 2021.
In 2000, Hammons installed nine fax machines in the cathedral-like ceiling of the Crystal Palace in Madrid. ‘Global Fax Festival,’ part installation, part performance, transformed the palace’s vast space through the transmission of paper messages that were sent in from around the world and, upon printing, fluttered down from the machines like a soft winter snow, gradually filling the floor over a five-month period. Five days before the festival’s end, Hammons and composer/conductor Butch Morris collaborated on a concert, one of the improvisational performances that Morris called Conductions, integrating sampled recordings with ambient sounds.

More than 20 years later, amid a global pandemic and in the absence of Morris, who died in 2013, Hammons has reimagined the millennial Madrid performance by responding to the surroundings of Hauser & Wirth’s Los Angeles complex, paying homage to a pioneer whose work has been important to his own. With this adapted ‘Global Fax Festival,’ messages no longer pour from fax machines but are dispersed on the ground, as if left in the wake of a tsunami. Morris’ presence is recaptured on screens that display recordings of the conductor gesturing directives during previous Conduction® performances. In turn, Morris’ virtual cues now prompt pianist Myra Melford—a former Butch Morris collaborator and an authority on his music and gestural language—to respond with her own live, improvisational sounds, bringing past and present together and animating the Global Fax Festival for a new generation.
​
This unique musical experience will be viewable at hauserwirth.com beginning Tuesday 25 May 2021 for digital audiences worldwide.
‘J.A. Deane, Zeena Parkins, and I were part of a core group of musicians in Butch Morris’ ensemble from 1985 – 1995 when he was developing his practice of Conduction®. It was such an exciting and inspiring experience to take part in something that was transforming the landscape of improvisational music. Butch was a true visionary artist, and his understanding of the infinite creative possibilities of working with all kinds of musicians, in diverse ensembles and irrespective of genre, is still ahead of its time. We look forward to continuing to celebrate his vision and to carry it further.’—Pianist, Myra Melford
PROGRAM INCLUDES
​
Musical materials drawn from:
‘Dust to Dust’ a recording from 1990 by Lawrence D. ‘Butch’ Morris on New World Records
Performed by pianist Myra Melford 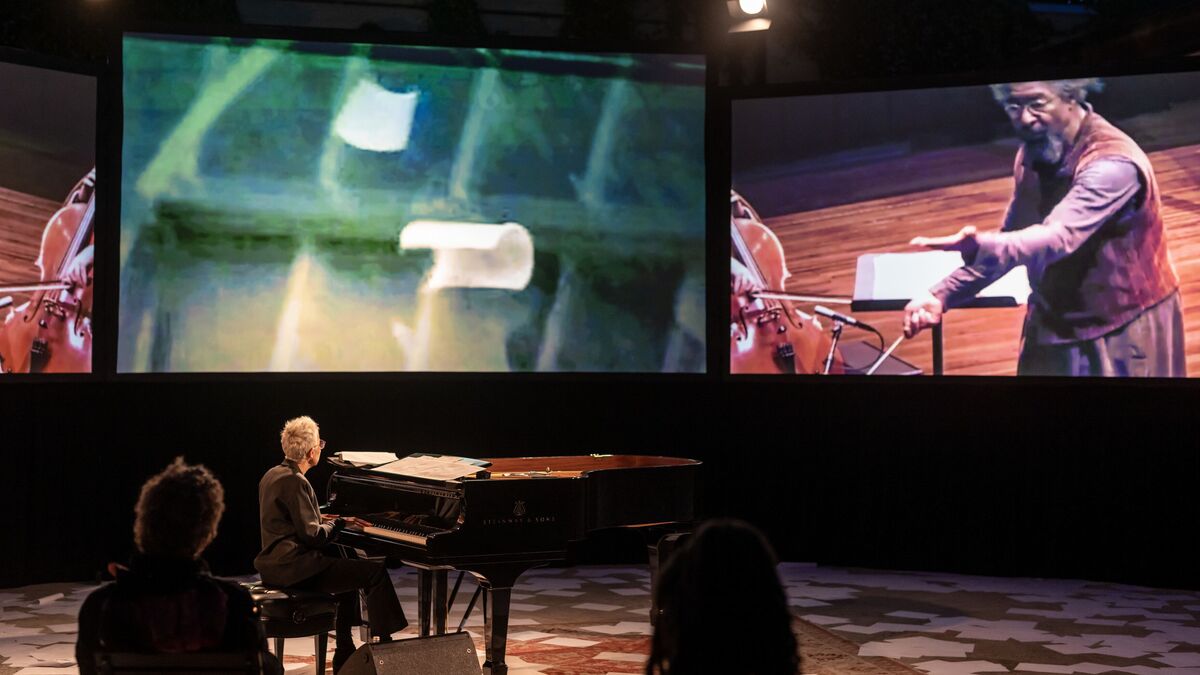 Lawrence D. ‘Butch’ Morris was recognized internationally as the principal theorist and practitioner in the evolution of CONDUCTION® and was a leading innovator in the confluence of new music, improvisation and contemporary classical music. Mr. Morris’s work redefined the roles of composer, conductor, arranger and performer, and continues to bridge the gap between the composer, interpreter and improviser. Beginning in 1974, his career was distinguished by unique and outstanding international contributions to art, television, film, theater, dance, radio, interdisciplinary collaborations, concerts and recordings, and he led Conduction® Workshops world-wide.

The practice of conveying and interpreting a lexicon of directives to construct or modify sonic arrangement or composition; a structure-content exchange between composer/conductor and instrumentalists that provides the immediate possibility of initiating or altering harmony, melody, rhythm, tempo, progression, articulation, phrasing or form through the manipulation of pitch, dynamics (volume/intensity/density), timbre, duration, silence, and organization in real-time.

The pianist, composer, bandleader and professor Myra Melford—whom the New Yorker called ‘a stalwart of the new-jazz movement’—has spent the last three decades making brilliant original music that is equally challenging and engaging. Culling inspiration from a wide range of sources including Cecil Taylor, the blues of her native Chicago, the poetry of Fernando Pessoa, literature by Eduardo Galeano, visual art and architecture, the Association for the Advancement of Creative Musicians (AACM), yoga, and Eastern philosophy; she’s explored an array of formats, among them ruminative solo-piano recitals, deeply interactive combos and ambitious multidisciplinary programs. The Other Side of Air, the most recent release by her quintet Snowy Egret, was named one of the best jazz recordings of 2018 by the New York Times and one of NPR Music’s 50 Best Albums of 2018. ‘This is music with an endless capacity for elasticity and surprise,’ NPR wrote, ‘along with an affirming spirit of coherence.’
She has received some of the most prestigious honors available to a musician: a 2000 Fulbright Fellowship, a 2012 Alpert Award in the Arts for Music and, in 2013, a Guggenheim Fellowship, the Doris Duke Performing Artist Award and the Doris Duke Residency to Build Demand for the Arts. In May of 2019, she collaborated with the San Francisco Contemporary Music Players, premiering a 35-minute commissioned work, Homogeneous Infiltration, that allowed her to showcase her deep and enduring passion for improvisation, experimentalism, and contemporary chamber music.

Founded in 1939 by Peter Yates and Frances Mullen in their modest Rudolf Schindler-designed Silverlake home, Monday Evening Concerts (MEC) is the world’s longest-running series devoted to contemporary music. Originally envisioned as a forum for displaced European emigrés and virtuoso Hollywood studio musicians to sink their teeth into the most daunting solo and chamber music of the day, MEC has blossomed its way to international acclaim for its presentation of demanding, uncompromising and poetically-charged music—whether new or ancient.

Monday Evening Concerts is a seven-time national winner of the ASCAP/Chamber Music America Award for Adventurous Programming. The series is discussed in Eve Babitz’s ‘I Used to be Charming and Eve’s Hollywood’, Susan Sontag’s essay ‘Pilgrimage: Tea with Thomas Mann’, and is the subject of a full-length book entitled ‘Evenings On and Off the Roof: Pioneering Concerts in Los Angeles, 1939-1971’ written by Dorothy Lamb Crawford.
​Special thanks from Monday Evening Concerts to Hamza Walker and Mahfuz Sultan.