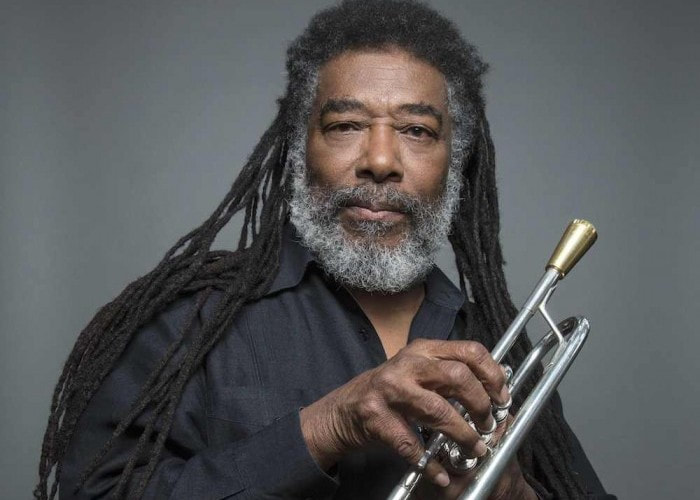 Tickets:
This event is free and open to the public.
Admission will be on a first come, first serve basis.

Safety Measures:
Proof of vaccination required.
Indoor event. Mask required.
Distancing not required.
Monday Evening Concerts is excited to join forces with LAXART to present an evening devoted to one of our most important living composers, Wadada Leo Smith. An early member of the revolutionary AACM (Association for the Advancement of Creative Musicians), Smith has spent a lifetime thinking, writing, composing, performing, teaching and collaborating with musicians such as Leroy Jenkins, Anthony Braxton, Henry Threadgill, Anthony Davis, Oliver Lake and Derek Bailey.

Wadada's scores reveal an inner cosmos, spanning a wide range of experimental techniques including his signature 'Ankhrasmations.' Performing three of Smith's most recent string quartets is the RedKoral Quartet, a group that was formed by the composer for the purposes of performing his own works. In Smith's words:

'My vision of music creation is centered in the twelve string quartets that I have composed so far. Those writings began in 1963, after hearing Ornette Coleman’s recording of ‘Dedication to Poets and Writers’ (1962). His work illustrated that one could use creativity and freedom as a major source in addition to inspiration in constructing a work of art.

A majority of my string quartets have some elements of the create and ankhrasmation language, and the ensemble forms. The scores are essentially non-metric, and a full page represents a complete “bar” length, with no maintaining of the concept of downbeat and upbeat idea. The ensemble’s leadership articulation continuously fluctuates from person to person as the decision for continuity keeps changing from page to page.'

We look forward to welcoming you at these concerts!