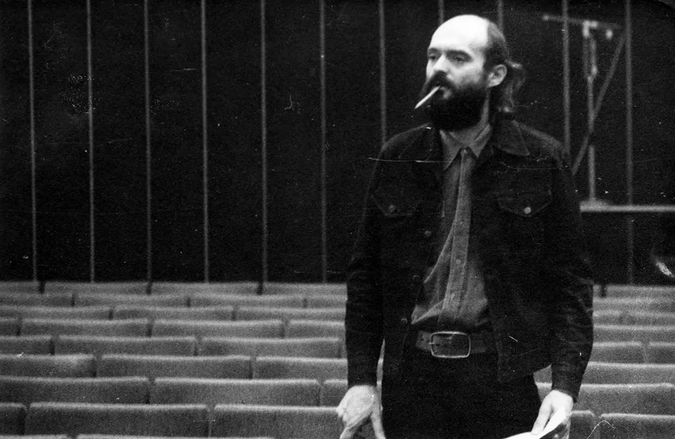 Arvo Pärt at a rehearsal for the 1977 world premiere of 'Tabula Rasa' in Tallinn, Estonia.
PROGRAM:

and
​
LAUDE, Vocal Ensemble
David Harris, conductor
ABOUT THE CONCERT:
“Time has a deep meaning, but it is temporary, like our lives. Only eternity is timeless.” - Arvo Pärt

Media vita in morte sumus. In the midst of life, we are in death.

'While composing, an image came to me:
that of archaeologists discovering a Stele and
vacuum-cleaning it until uncovering a funerary inscription on it.'
​- Gérard Grisey

​Tabula Rasa. Clean Slate.​
ARTIST BIOS:
​Movses Pogossian made his American debut performing the Tchaikovsky Concerto with the Boston Pops at Symphony Hall in 1990, about which Richard Dyer of the Boston Globe wrote: “There is freedom in his playing, but also taste and discipline. It was a fiery, centered, and highly musical performance…” Movses Pogossian has since performed with orchestras such as the Brandenburger Symphoniker and the Halle Philharmonic in Germany, the Sudety Philharmonic in Poland, the Tucson Symphony, the El Paso Symphony, the Scandinavian Chamber Orchestra of New York, and the Toronto Sinfonia. His recent and upcoming performances include recitals in New York, Boston, Ann Arbor, and concerts in Korea, Japan, Germany, Canada, and Armenia. Pogossian was one of the 2016/17 Artists in Residence of the Los Angeles Chamber Orchestra, and performed the Mansurian Concerto No. 2 at their season-opening concerts, conducted by Jeffrey Kahane.

He is a Prizewinner of the 1986 Tchaikovsky International Competition, and the youngest-ever First Prize winner of the 1985 USSR National Violin Competition, previous winners of which included David Oistrakh and Gidon Kremer. An active chamber musician, Pogossian has performed with members of the Tokyo, Kronos, and Brentano string quartets, and with such artists as Kim Kashkashian, Jeremy Denk, Lynn Harrell, Ani and Ida Kavafian, and Rohan de Saram. He frequently collaborates with the Apple Hill Chamber Players, teaching annually at their summer music festival in New Hampshire. Movses Pogossian is the Artistic Director of the critically acclaimed Dilijan Chamber Music Series. (https://dilijan.larkmusicalsociety.org).

A committed propagate of new music, Pogossian has premiered over 80 works, and works closely with composers such as G. Kurtág, K. Saariaho, T. Mansurian, A. R. Thomas, P. Chihara, and Gabriela Lena Frank. He is the recipient of the 2011 Forte Award from Jacaranda, given for outstanding contributions to the promotion of new music and modern music.

His discography includes Complete Sonatas and Partitas by J. S. Bach and solo violin CDs of mostly world premiere recordings “Inspired by Bach”, “Blooming Sounds”, and “In Nomine”.  The 2009 release of G. Kurtag’s “Kafka Fragments” for soprano and violin on Bridge label (with Tony Arnold) includes a unique video documentary on the work with the composer, and a DVD of an unedited live performance. In his review of the recording, Paul Griffiths writes: “…remarkable is Pogossian’s contribution, which is always beautiful, across a great range of colors and gestures, and always seems on the edge of speaking—or beyond.” The Bridge Records CD of Complete Violin Works of Stefan Wolpe made the 2015 Top Ten list in Sunday Times (UK), and the 2020 releases of Armenian contemporary music: “Modulation Necklace” (New Focus Recordings) and “Con Anima” (ECM) have garnered widespread critical acclaim. Upcoming releases include a Schoenberg/Webern DVD, recorded at Arnold Schoenberg’s Brentwood home (with Kim Kashkashian, Rohan de Saram, and Judith Gordon), and a sequel to “Modulation Necklace”.
​
Since earning his advanced degrees from the Komitas Conservatory in Armenia and the Tchaikovsky Conservatory of Music in Moscow, Mr. Pogossian has held teaching positions at Duquesne, Bowling Green, Wayne State, and SUNY Buffalo Universities. His principal teachers were L. Zorian, V. Mokatsian, V. Klimov, and legendary Louis Krasner. Movses Pogossian is currently Professor of Violin at the UCLA Herb Alpert School of Music, as well as Founder/Director of the UCLA Armenian Music Program. He is a Los Angeles Chapter Head of the Music for Food, which raises awareness of the hunger problem and gives the opportunity to experience the powerful role music can play as a catalyst for change.
Varty Manouelian made her American Debut in 1993 with the North Carolina Symphony as First Prize winner of the Bryan International Competition. She has also been a prize winner at a number of other competitions in Europe, including the Kotzian International Competition and the Wieniawski International Violin Competition. Manouelian has recorded and appeared as a soloist with numerous orchestras in the United States, Bulgaria, Russia, Armenia, Poland, Spain and Italy. Her chamber music performances include Marlboro Music Festival, Apple Hill Festival, Sebago Festival, El Paso Festival, Olympic Music Festival, among others. She has collaborated as a chamber musician with such artists as Yuja Wang, Kim Kashkashian, Rohan de Saram, Joshua Bell, Nobuko Imai, Thomas Adès, and members of the Juilliard, Guarneri, Tokyo, Brentano, Borromeo, and Mendelssohn string quartets.

Dedicated teacher and educator, Varty Manouelian is a Lecturer of Violin at the UCLA Herb Alpert School of Music, teaches violin and chamber music at the Colburn Academy and CSPA, and spends summers coaching chamber music at the Apple Hill Festival in New Hampshire. She has been an active participant at LA Philharmonic’s Music Outreach programs, having taught at YOLA since its inception, as well as at the Renaissance Arts Academy.
​
Prior to joining the Los Angeles Philharmonic in 2004, Manouelian was a member of the Detroit Symphony Orchestra. In Los Angeles, she frequently performs at the Los Angels Philharmonic’s Chamber Music Society and Green Umbrella new-music series, as well as at Camerata Pacifica, Monday Evening Concerts, and the Dilijan Series. Her recording credits include archival radio recordings for the Bulgarian State Radio, and CDs on Albany and Bridge Records labels. Her recent CD of Complete Violin Works of Stefan Wolpe (jointly with Movses Pogossian) made the 2015 Top Ten list in Sunday Times (UK). Varty Manouelian holds degrees from the State Music Academy in Bulgaria and the Cleveland Institute of Music, where she studied with Boyan Letchev and Donald Weilerstein.
UCLA Camarades (“The Music of Friends”) is the title given to the chamber music program that is guided and driven by the String Department. Comprised of UCLA’s Herb Alpert School of Music acclaimed string faculty and its most gifted students, it ranges from duos to full string orchestra. Since its inception in 2009, Camarades ensembles have performed at numerous chamber music series and venues throughout Los Angeles including UCLA’s Schoenberg Hall, LACMA’s Sundays Live, Trinity Lutheran Church in Manhattan Beach, the Dilijan Chamber Music Series at Zipper Hall, the Music Guild, as well as featured guests at the Los Angeles Philanthropic Committee for the Arts’ annual gala at the Dorothy Chandler Pavilion. Residencies at international festivals in the summer of 2012 and 2014 – in Yerevan, Armenia, and Tuscany, Italy – were particularly enriching and memorable experiences.
​Laude is the resident professional ensemble at First Congregational Church of Los Angeles led by director David Harris. First Church strives to redefine religion and the arts through inclusion, equity, diversity. Laude’s membership of soloists, film and stage actors, business leaders, composers, conductors, and instrumentalists defines the robust chamber group, lending it noted flexibility and strength. During quarantine Laude created hundreds of virtual recordings, presented three stand-alone concerts, and recorded the premiere of Patrick Cassidy’s choral/organ “The Mass,” available on Supertrain Records starting 11/8/21 (fccla.org/the-mass-album). In addition to regular Sunday performances, the 2021-2022 season includes Sheppard’s “Media Vita” at Monday Evening Concerts, the “Fulfilling The Dream” MLK concert (1/9/22) and a live premiere of “The Mass” (2/5/22) with choirs from across L.A.
David Harris (DMA) specializes in new music, American music, and the intricacies of communication in singing, writing, and conducting. He has premiered hundreds of pieces, and helped FCCLA become a hub for new music. A composer/performer, David champions diverse styles by scientifically illuminating timbre and its influence on voicing, and by bring awareness to emotional and cultural underpinnings that inspire respect and authenticity. As Ensemble Director for L.A.’s N.E.O. Voice Festival (neovoicefestival.com, applications open 10/28/21) he guides composers and vocalists into renewed awareness of the voice in a safe, experimental environment. He is the Director of Music and Arts at FCCLA where he leads Laude, the Cathedral Choir, and the children’s chorus. He is the co-founder of VoiceScienceWorks with Laurel Irene. Their podcast Underground Ictus illuminates compassion and learning theory for today’s conductors.