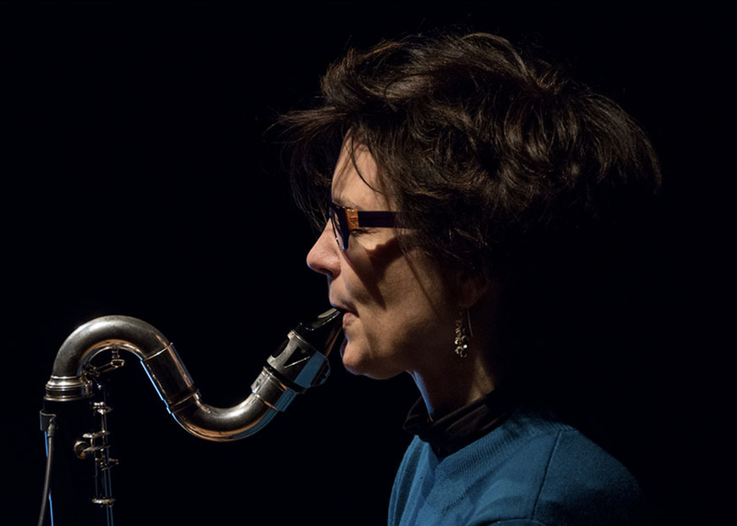 Carol Robinson, birbynė
ABOUT THE CONCERT:
Monday Evening Concerts is happy to welcome the Franco-American composer, improviser, clarinetist and birbynė player Carol Robinson for a guest recital. An intimate collaborator of contemporary music icon Éliane Radigue, Carol will present a unique program of rarely-heard works performed on the birbynė, a Lithuanian wind instrument. We hope you'll join us for this special event! 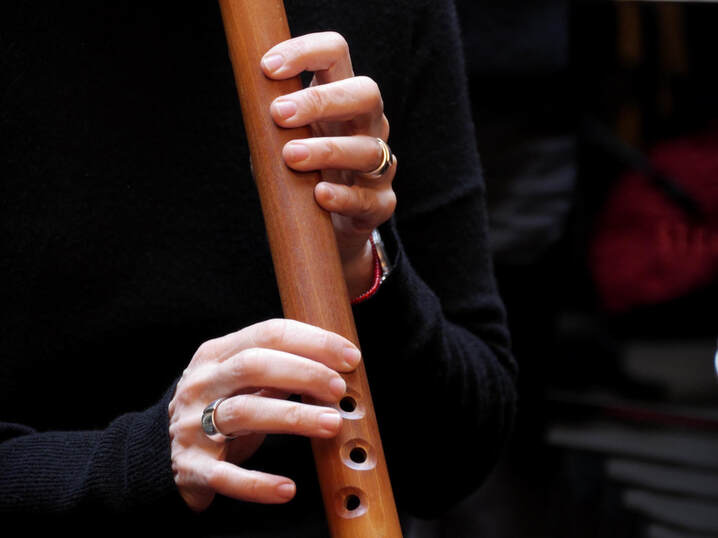 Carol Robinson playing the birbynė, photo by Igor Juget
ABOUT THE BIRBYNĖ:
The birbyne is a traditional instrument found only in Lithuania. A member of the clarinet family, it has a single reed attached with a tightly wound string, and is typically made out of maple or cherry wood cured in hot flax oil or resin. The lower end is fitted with a flared cow horn. Though there are various models, the most commonly used modern version has ten finger holes (including holes for both thumbs!) and a brass register key. The bore is neither quite cylindrical nor quite conical, which allows the instrument to overblow at an unprecedented tenth. These physical traits have resulted in an instrument capable of producing a warm rich sound closer to a human voice, an Asian flute, or an Armenian doudouk than to any sort of European single reed instrument. (Text by Carol Robinson)
ARTIST BIO:
To say that Carol Robinson is a Franco-American composer and clarinetist is perhaps too restrictive to describe the eclecticism of her experience and passion. In fact, she seems interested in everything having to do with sound. She is not someone who likes the middle ground, preferring the edges, the extremes. Her music is situated in those places of tenderness and rage, gentleness and power that come from experience and mastery. Trained as a classical clarinetist, she graduated from the Oberlin Conservatory before continuing her study of contemporary music in Paris thanks to a H.H. Woolley grant. Whether playing repertoire or experimental material, she performs in major venues and festivals the world over (Festival d’Automne à Paris, MaerzMuzik, Archipel, RomaEuropa, Wien Modern, Huddersfield, Geometry of Now, Angelica, Crossing the Line…), and works closely with musicians from a wide stylistic spectrum. A fervent improviser, she prefers the most open musical situations and regularly collaborates with photographers, visual artists and videographers.

Long fascinated by the extended possibilities of live and fixed electronic music, Carol has written numerous pieces for acoustic instruments and electronics. Her exploration and use of aleatory procedures is distinctive.

In 2012, she began a cycle called The Weather Pieces that incorporates these methods. Three of these pieces will be released on MODE RECORDS: Nacarat for electric guitar and quadriphonic electronics (co-production La Muse en Circuit, Césaré, Art Zoyd), Black on Green for double bass and tri-phonic electronics (commission – GMEM), and Les si doux redoux for basset horn and mobile stereo electronics.