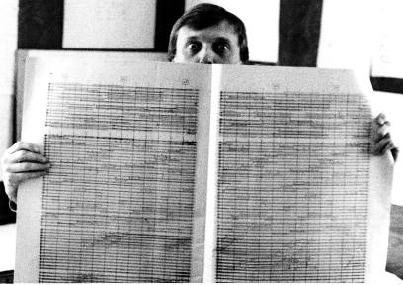 Gérard Grisey with an absurdly sized score.
Gérard Grisey was born in Belfort on June 17th, 1946. He studied at the Trossingen Conservatory in Germany from 1963 to 1965 before entering the Conservatoire National Supérieur de Musique in Paris. Here he won prizes for piano accompaniment, harmony, counterpoint, fugue and composition (Olivier Messiaen’s class from 1968 to 1972). During this period, he also attended Henri Dutilleux’s classes at the Ecole Normale de Musique (1968), as well as summer schools at the Accademia Chigiana in Siena (1969), and in Darmstadt with Ligeti, Stockhausen and Xenakis in 1972.
​
He was granted a scholarship by the Villa Medici in Rome from 1972 to 1974, and in 1973 founded a group called L’Itinéraire with Tristan Murail, Roger Tessier and Michael Levinas, later to be joined by Hugues Dufourt. Dérives, Périodes and Partiels  were among the first pieces of spectral music. In 1974-75, he studied acoustics with Emile Leipp at the Paris VI University, and in 1980 became a trainee at the I.R.C.A.M. In the same year he went to Berlin as a guest of the DAAD (Deutscher Akademischer Austausch Dienst), and afterwards left for Berkeley, where he was appointed professor of theory and composition at the University of California (1982-1986). After returning to Europe, he has been teaching composition at the Conservatoire National Supérieur de Musique in Paris since 1987, and holds numerous composition seminars in France (Centre Acanthes, Lyon, Paris) and abroad (Darmstadt, Freiburg, Milan, Reggio Emilia, Oslo, Helsinki, Malmö, Göteborg, Los Angeles, Stanford, London, Moscow, Madrid, etc.)